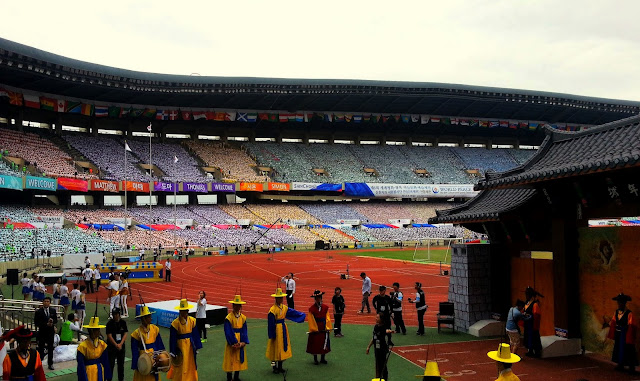 Jackie and I had a great time Saturday. I will blog about the great place we ate at and the awesome pizza we made later. But for right now I want to write about what happened Sunday.

It all started Saturday when we were getting lunch in Itaewon. It is an area known for having a great deal of foreigners due to the US military base nearby. After eating we walked outside and waited to cross the street. Jackie went to take a photo and I stood at the crosswalk. While I was waiting, two Korean girls came up and offered to give me a free ticket to the World Peace Festival at Olympic Stadium on Sunday. I called Jackie over and the girls explained everything to the two of us. Lunch would be provided, a free shuttle bus would take us there and we would get a free shirt. The purpose of the festival would be to promote peace in conjunction with the United Nations' International Day of Peace.

We had no Sunday plans and, while at High Street Market earlier, we had heard John Lennon's "Give Peace a Chance," so I was willing to try it out. It sounded like fun. Well, it was certainly something.

We left for the meet-up point at 8:30 a.m. It was a beautiful morning and calm. At the meet-up point, we were given a t-shirt with a sticker of the United States flag on it and a gift bag full of snacks, water and a Coke. Pretty nice. We loaded into the bus. There were six volunteers and maybe seven of us on the charter bus. There was only one other American. I know a few women were from the Philippines. I am not sure where the other guy was from. Our group leader looked like Carrie Brownstein from Portlandia, Wild Flag and Sleater Kinney. I love her!

It took awhile to arrive at the stadium. When we stopped, we had to line up and follow our group leader into the stadium. As we walked through the corridors of Olympic Stadium, the performers and athletes of all ages lined our path. They all had the biggest smiles on and waived at us constantly. It was nice. Jackie even commented that it was great to see so many happy people. I gave a group of young baseball players a bunch of high fives. We enjoyed the walk. Then we had to wait for our seats to be found.

They led us to some empty seats in a really poor area for viewing the proceedings. There was a big gate in front of us. Nevertheless, it was not too bad because there were a couple of giant screens showing the action from all angles. The stadium was packed. The stadium was color coordinated. In each section, every person wore the same thing as the others in that section. Everything was colorful. In front of each color-coordinated section and at intervals up in the sections, were people directing when everyone should yell, cheer and clap. They were not like cheerleaders. It was a staged show of support for things. The sections obeyed almost completely (save for the random person who coughed from time to time or whatever). 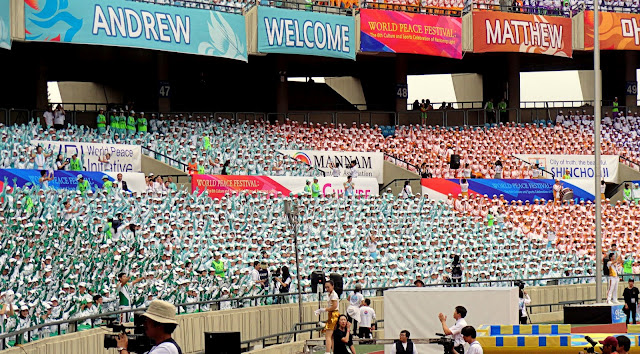 Eventually, an old man, Man Hee Lee came out of the tunnel. The Korean volunteer sitting next to me, a woman in her 50s, kept excitedly hitting my arm and pointing to him. Then she would look at me with a you-should-be-more-excited-to-be-near-him look. She would explain, with hyper enthusiasm, things to me, except she only spoke Korean so I understood none of it. Mostly he looked silly. The crowd was going crazy though. 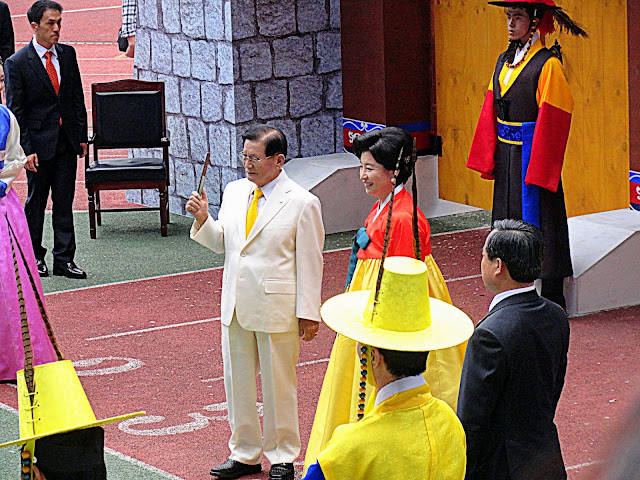 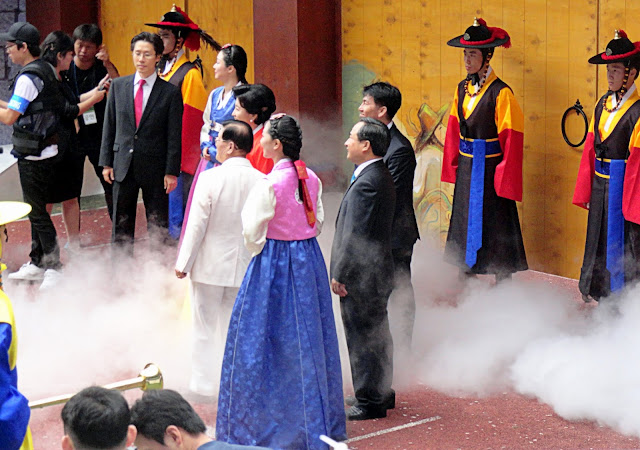 It seemed he was the director of the organization. And while I thought the smoke, fireworks and loud music that accompanied his arrival were a bit over the top, I figured it was a cultural thing. Maybe he was a professional wrestler or something.

What I did understand, however, were the English subtitles on the television screens. Mr. Lee was somebody who was going to bring the light of God to the world. Um, okay? Jackie and I were a bit taken back by the overt religious language of everything. The hosts of the event would mention what was going on, first in Korean and then in English, and it also included a lot of light versus darkness talk and some other strangely worded sentences. Apparently, in 1984, the universe completed its rotation and that is significant for some reason, I can not remember exactly. Also, this event was "more like the Olympics than you would first expect" because the Seoul Olympics had a similar slogan.

Then the procession started. Each group of bands, drummers, athletes, children and marchers were part of "tribes." There was some mention about Isreal for some reason. Anyway, the tribes were Simon, Bartholemew, Matthew, Andrew, John, Thomas, Peter, etc. I am Catholic. I know those are some of the names of Jesus' disciples. On the tv screen, it was mentioned where they had each tribes' churches and what they were for (some symbolized the "wisdom of the majestic eagle, etc). Some of the churches were from as far away as the Netherlands and Australia. All the parade participants looked Korean though. 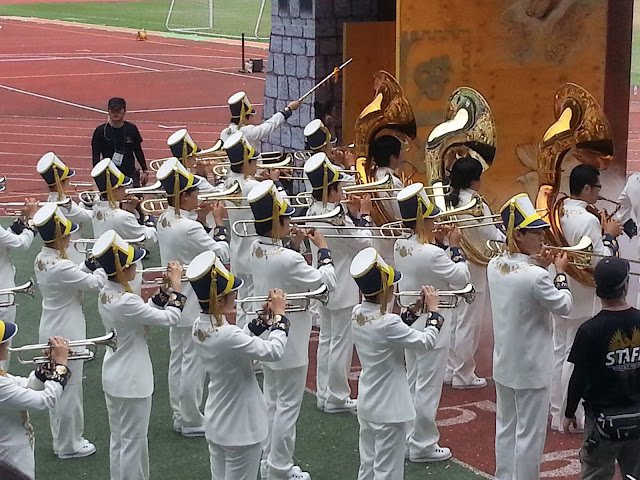 By this time, listening to the hosts talk about religious themes and reading the overtly religious words plastered across the tv screens, we knew this was not some UN-related peace event; it was a religious celebration that had tricked us into attending. The other foreigners all seemed to be enjoying themselves. Us two looked to be the only ones not smiling. Honestly, it started to seem a little creepy. I thought we were brought over to be spectators. But if that were the case, the people who were in our section made up about a sixth of the audience. Every other section was full of people from these "tribes." The sections on the opposite side of the stadium created pictures from giant cards they would hold up. As each tribe was announced, they would spell out the name and create a picture. They also created a bunch more pictures from time to time. While we were there it was probably up to a dozen distinct pictures. 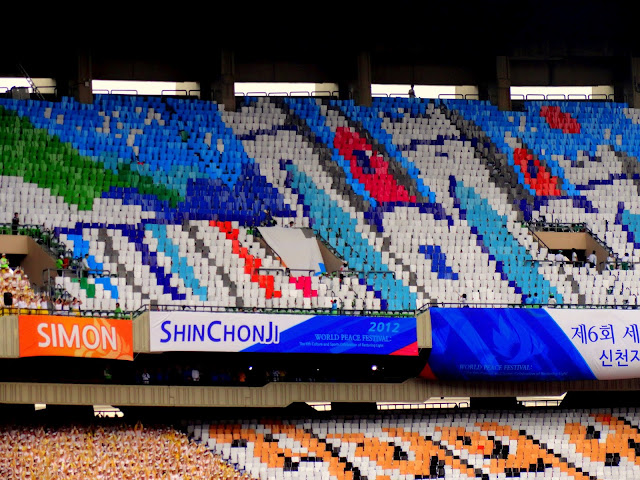 And they waved flags a lot.

Neither of us wanted to be there any longer. However, we felt trapped on all sides. It was such an ugly feeling. There were so many people that there was no room to walk. We had been told to give our badges back when we wanted to leave, so we had to actually check in with these people first. It is hard to be rude, especially when they had given us so many things. Plus, the whole scene was intimidating. When 100,000 are chanting and you aren't in agreement or included, you start to feel isolated and small.

But it was all too much and we finally gave our badges back before we pushed our way through the droves of people who even covered the stairs, a sure fire code violation if we were in the States. Once outside the stadium, it was all we could do to get as far away as possible. We had gone expecting a gathering about peace and had gotten a crazy religious celebration. They had used us to fill seats and who knows what else...

When we got to the apartment I immediately began reading everything I could about this organization and Mr. Lee. There are some interesting, strange things.


So that was my Sunday. Hope everyone else had a good time. And remember, kids, "Where light meets light, there is victory!"

Popular posts from this blog

February 06, 2014
See those hills? Those are the famous Chocolate Hills of Bohol. After a day of exploring the area near Doljo Beach where we were staying and meeting a strange man , we decided to book a tour of the Chocolate Hills of Bohol . Sadly, a horrible earthquake had caused a great deal of damage. Hundreds of people died and many buildings were demolished, including multiple famous churches. The strongest part of the earthquake happened very close to the Chocolate Hills. For months, we had been monitoring the safety of the island and almost considered changing our plans for the entire country, but we decided to go anyway. In November, following the big typhoon, another earthquake occurred ...
Post a Comment
Read More »

March 01, 2017
On the morning of my last day in Siem Reap, I got up super early. I was finally going to see one of the most famous places in the world, Angkor Wat. Outside of my hotel, there were tuk tuk drivers waiting to take anyone to the sites. I basically went with the one who was the least pushy. For a pretty low price, he offered to take me around for the day. I wouldn't say he was a tour guide, but he set the itinerary and then would leave me at each place for as long as I wanted to stay. Because my time was limited, I wanted to get through all the best places as quickly as possible. My flight left in the evening that day, so I needed to get back to get my stuff at the hotel and then get to the airport. While I would have liked to spend more time, maybe bike around on my own, now I just have a reason to visit again in the next few years! You have to pay for a day pass before entering. It is all clearly marked and easy to do. They take your picture and put it on the pass. At various
1 comment
Read More »

October 23, 2011
Before I moved to Portland , Jackie and I decided to go see Theophilus London in Seattle . She introduced me to his music months previous, but I had just developed a love of his first LP, Timez Are Weird These Days. One night we were chatting online, like we did nearly every single day since we met, and quickly made the decision to buy the tickets and get a hotel room. A Seattle adventure! We had been on adventures before, taking photos of graffiti art in downtown El Paso , searching around Las Cruces , basketball at random courts around El Paso, etc, but this would be on a wholly different plain. And we both felt excitement build as the day closer.
Post a Comment
Read More »